My greatest thanks go to you for helping me to travel last summer as a recipient of the Goliard Scholarship. I fully enjoyed the experience, and I hope that those wanderings and all of my future ones are up to your standards.

I arrived in Toledo on May 13 (my birthday), after spending a couple of days in Madrid as a full-out sightseer/tourist. Of all the museums, I recommend most highly the Museo de Jamon (Museum of Ham). It knocked my socks completely off. Hams of all shapes and flavors hang from every available inch of wall and ceiling apace. I had a ham sandwich (mmm). My favorite ham is the one you find all over Spain -- the aged, cured pig leg that you buy whole and gradually whittle away for a month or two. It smells faintly like your armpit after exercising, which if not altogether unpleasant, because I did say "your" as in your own armpit, your own sweat. I am sure you will agree that it is only the sweat of others that is offensive, and this ham had none of that. The taste of the aforementioned ham in the aforementioned museum of ham was beyond comparison. 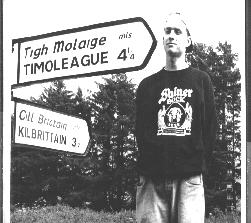 After touring Madrid, I hopped a quick train to Toledo, to meet my host family. Jose Rodriguez Alcalde and his wife met me at the train station outside of Toledo. Jose is the uncle of Javier Rodriguez Zapatero, a foreign exchange student from Cordoba, Spain who lived with my family in Ohio for a year during high school. He arranged the open-ended lodgings with his uncle in Toledo. They have a two level flat in the more modern part of Toledo, about a mile walk to the gates of the old walled city. The second level was a guest quarters, a small single room with a study alcove and bathroom. This was to be mine as long as I wanted to stay.

I did not tell them that it was my birthday. Spaniards seem to have taken the Latin concept of the perfect host and extended it past all bounds. Cause for a birthday celebration would likely have whipped them into a hospitality frenzy! I don't think I could have handled on our first day. The next day, Sr. Rodriguez took me into the town to see the sights and also to introduce me to the Fabrica de Armas. That morning we paid about $1.50 each to be shuttled Barnum and Bailey style past El Greco's Burial of Count Orgaz. It's a splendid painting, but I enjoyed the mode of visitation much more.

As far as the modern sword-making trade, Toledo is still the most world renown center and produces some of the finest 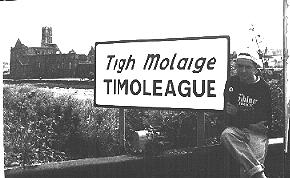 blades. In fact, both the Navy and Marines order their distinguished honor swords from the Fabrica in Toledo Spain. Because of their modern day success in the decorative armament business, however, the spirit of the handmade good, the artisan tradition, the focus of my quest, the very crux of my proposal, has met with the ugly demise of Henry Ford assembly line production. When Spain threw off the last influences of Franco (by the way, I saw some great Franco Era movies on an afternoon Spanish television station--all singing priests and married happy Spaniards, singing and praising the graces of Spain. Very campy; even for a foreigner) and began to enjoy the benefits of freedom, the ugliest aspects of a capitalist society came creeping in as well. Not that I spent my days watching television, but I did happen to switch onto a dubbed version of the 1978 classic "Roller Boogie." That's an ugliness Franco would not be too happy about.

The shop in the old part of the city is actually owned and operated by the same Fabrica de Armas. All the pretension of an old-fashioned sword-making shop are there, random sword components scattered around the workshop, smiling workers assembling swords and display cases of finely finished products. The manager of the shop, however, confided that the bulk of the sword manufacturing is done in the factory. Mass produced threaded Components are Shipped to the shop for the final assembly--screwing the handle on the blade and adding the various decorative details. Since the old city sees the tourist traffic, a working sword-making shop is good for selling swords, especially in 1992, with the new commemorative Olympic sword available. This was disheartening logic to say the least.

The sword-making tradition, however, is still loved in Toledo--the historical collection in the Alcazar is unrivaled and almost all public culture focuses on the sword making tradition. That every schmaltzy tourist trinket shop peddles authentic Toledo blade letter openers, however, is one more realization that the ancient tradition of sword crafting is useless and dead in modern times.

I did find honest artisanship on a weekend trip to Tetuan, Morocco. Their work, however, was probably not stemming from a love of old world craftsmanship value, but more likely due to their primitive, near-third-world living conditions. Stimulate the Moroccan economy, and you'll find artisanship more or less confined to Renaissance festivals, or whatever the Moroccan equivalent would be. Although I did not get the opportunity to learn and work at an age old craft, all was not lost. I spent about a week photographing the factory and shop workers. I even got the opportunity to eat a couple of my favorite ham sandwiches with the workers from the Fabrica. At lunchtime, they hang out, drink coffee and eat ham sandwiches in a closet-size shop a block away. It's easy to spot the Fabrica de Armas workers, they all wear dark blue zip-up jumpsuits, like mechanics.

With two weeks left until I returned home, I found I still had the Goliard urge in me and embarked upon an unrelated journey in which you may find interest. From Madrid I traveled straight through eighteen hours on the train to Le Havre. Twelve hours on a night ferry and I was in Dungarvan, Ireland, only a brief two hour bus trip to Cork. In Cork I rented a car, oriented myself to driving on the wrong side of the car on the wrong side of the road, and took off in a flash, south by southwest, stopping only to kiss the beloved Blarney Stone and to allow my faithful assistant to photo-document relevant landmarks as we neared our destination. After three days of breakneck travel, I found myself at home, in my name, in my town. Tim A. League had arrived in Timoleague, Ireland. Dr. Carroll, the Dean of Engineering was born and raised near Cork, Ireland, and when I was talking to him at graduation, he told me about Timoleague and the crazy coincidences of names. My faithful assistant was Nikol Lohr, a graduate of UT, I met on the ferry to Ireland. I convinced her that if she would take pictures of me along the way, I would take her to a place where we could drink Guinness for free. I can actually thank Oliver Cromwell more than the Irish for my free beer on that trip. In Gaelic, Timoleague is actually Tigh Molaige or Abbey of the Molaige family. Cromwell destroyed that Abbey, and in the later process of Anglicizing the Gaelic Name, the British bastardized Tiqh Molaige into Timoleague, opening the door for my free beer scam (when said with a heavy Gaelic accent, Tigh Molaige does sound quite a bit like Timoleague). A simple flip open of the old passport and a brief description of my trials to reach that very barstool in that very town started the tap freely flowing. In addition, I got a solid background of the town and area history as well as a collection of Timoleague bar glasses. There are no more than 1000 residents of Timoleague, yet they still respectably support three fair sized pubs, all of which I found hospitable. If I ever have a male child, I will most certainly name him Drim O. League (another nearby town, namesake of the Molaige families He will undoubtedly resent the name when he is young, but someday when he is older it will have all been worthwhile.

That is all to report for now. My sword-making plans did not pan out as Well as I would have hoped, but that is not to say that I gained nothing, nor had a poor time. The trip war sincerely worthwhile, but more importantly, the Goliard Scholarship is worthwhile. I hope that I can continue my involvement with your group. I look forward to hearing about more Goliard adventures from future recipients.

Thanks again, and by the way, track down Tom Karsten (WRC '93) when you are all back for Beer Bike. When I was back in Houston for work in October, Tom and I made a pact over beers in Valhalla and began making arrangements to reinstate the senior cane tradition. Tom took the ball and got it done when I returned again in February. The canes are hand-made by Paul Sellera, an English woodcarver in Willow City, Texas, population 15. He came to Texas on vacation in 1986, and was so struck that he stayed and set up his trade. One must always respect a fine craftsman. As your graduating classes undoubtedly missed out on this tradition, you are entitled to make up for the spent time now--the canes are here and the policy it grandfathered. If you can't find Tom and want to order canes, give me a call and I can place it for you .